We want to know: 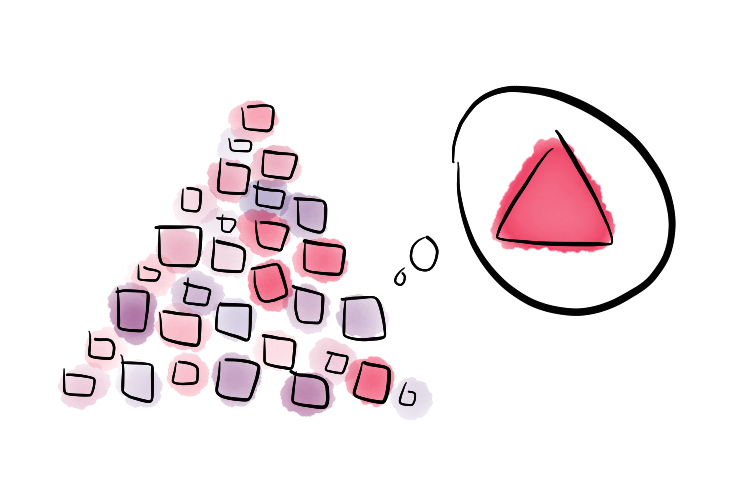 <— Zoom out to a more coarse-grained view

We are inspired by impressive feats of coordination that are so common in the biological world that it is easy to forget how unlikely they are. Cells differentiate into distinct types, carrying out well-specified roles based on noisy expression and interaction of gene products. Brains actuate reproducible, adaptive responses using a noisy, ever-changing jumble of electrical activity. A honeybee colony can quickly change its behavior in response to a shock, distributing tasks efficiently among individuals without centralized control.

These are all examples of collectives, cases in which we understand in some detail how interactions play out at the level of individual components, but the relevant outputs are at the level of the aggregate. The mapping from micro to macro level behavior is typically intricate and often mysterious.

Multiple academic disciplines have developed tools to approach specific aspects of collective behavior. Statistical physics has a long history of explaining collective dynamics of large systems, but for much simpler components like atoms and molecules. Machine learning looks for aggregated patterns in data, but typically lacks understanding of how these patterns are connected to the behavior of individual components. Biology has a wealth of knowledge about how component mechanisms contribute to collective function, but is confronting conceptual difficulties in scaling up to systems that have a large number of strongly interacting components. Our group combines and builds from these existing tools, focusing not within a discipline but on our driving question: What is the logic of collective behavior?

We look particularly for formalisms that can apply across multiple examples of living systems. These include:

Dimensionality reduction is key to this endeavor, leading to simplified, aggregate-level approximations of high-dimensional systems. In our view, inspired both by Borges and the concept of coarse-graining in statistical physics, such simplification is not merely convenient but integral to what it means to do science. In this spirit, the coarse-grained, simplified explanations we give in the alternate versions of this research statement are equally as valuable as this detailed, jargon-heavy version.